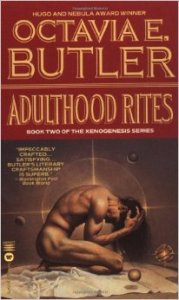 “The Human Contradiction again. The Contradiction, it was more often called among Oankali. Intelligence and hierarchical behavior. It was fascinating, seductive, and lethal. It had brought Humans to their final war”

Earth was nearly destroyed in a war until the Oankali came to save the planet and inhabit it themselves. Slowly, they are unfreezing humans to live and breed among the alien species. Lilith gives birth to the first male human/Oankali construct, whose name is Akin. Before Akin can even learn to walk, he is snatched by human “resisters”–humans that refuse to be treated and bred like animals by the Oankali. He grows up in a strictly human village and stripped of his contact with his Oankali family and friends. There Akin learns that the humans yearn to be able to raise families made up of only human DNA. Akin must choose between staying true to his Oankali genes, or fighting for a life for the human race.

Although this book is a sequel to Dawn, it can almost be read by itself if the reader is given a little background information. Dawn it told in Lilith’s point of view while Adulthood Rites is narrated by Akin.

I don’t want to spoil the first book for anyone, so this review will contain more opinions than plot critique. I wish I had liked this book more. Dawn, in my opinion, is one of the best sci-fi novels I’ve ever read. I was so excited for the sequel to live up to it; but maybe my expectations were set too high. It was interesting to read this book from a child’s point of view, knowing that he is a biased narrator yet believing everything he says. Butler does a great job painting the conflict that Akin feels between his split human and alien DNA.

I find it amusing that this series is categorized as “horror”. I almost didn’t start it because I was scared it would be too disturbing/horrific. “Post apocalyptic” is definitely a better genre, but it is irking to read about humans used as gene material and treated like animals by alien beings who have tentacles growing out of their bodies.

If you’re looking for a good adult sci-fi read, I definitely recommend trying this trilogy out. I look forward to (hopefully) reading the third book this month. I have a habit of putting off the last books of series and end up never finishing them.