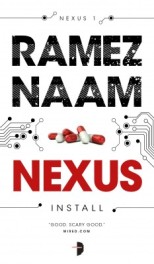 Nexus is a drug that connects peoples’ minds together in low doses, and can allow people to alter the way their brains work in high doses. On the more extreme end, a few scientists have permanently put Nexus into their brain and used it to become almost super-human. These scientists are working to make Nexus a safer and practical drug, until they get caught illegally altering and administering the drug and are forced to give the blueprints up to the government. What happens when this potentially dangerous drug gets into the wrong hands? What happens if people all around the world are creating their own versions of Nexus, each with different purposes in mind? How far can one alter their brain until they become non-human altogether?

The concept of this book reminded me a lot of Philip K. Dick’s Ubik, which I loved, so I was really excited to start this book. Let me tell you, I was not disappointed. In my opinion, it’s very easy to write a book about the dangers of mind-altering drugs and fill it with fluffy, filler plot devices. Ramez did a great job of not doing this. The plot, characters, and dialogue were very constructive and really made me think of the pros and cons of developing mind tools.

I thought the most interesting parts of Nexus were the instances that you got to see how the drug affected the brains of the narrators. I can’t imagine what it feels like to have connected minds and experience other people’s memories, and I found reading about that fascinating. Also, the concept of treating your mind like a computer and uploading programs coded specifically to manage anxiety and stress is one of the coolest things I’ve ever read about. If that were possible today, would there be need for anxiety medications? Could there be a programs designed to help with other conditions or mental illnesses?

The negative thing I have to say about Nexus is that is dragged out a lot. I thought it should have ended 75 pages sooner, because I became bored in the last few chapters. I felt like there was a lot of extra plot and dialogue that wasn’t needed. I ended up skimming the last hundred pages or so. I hate doing this, but I was quickly losing interest and I really wanted to finish the book!

All around, great characters, great themes, great conversation starter. Like I said, this is a topic that can either be done really poorly or really well, and Nexus was definitely the latter. I love a good thought-provoking sci-fi novel, so I’m really pleased with this book.