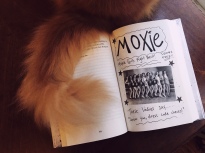 Vivian is tired of the sexism she sees in her fellow classmates and her high school’s administration. Boys are constantly telling girls to ‘make them a sandwich’ or wearing shirts with misogynistic slogans. Even worse, the principal feeds into this rhetoric by doing random dress code checks, which don’t have any set rules, so girls are forced to change for arbitrary reasons that teachers decide on the spot. Vivian decides to follow in her feminist mother’s footsteps and create a zine, called Moxie, to secretly put in the girls bathrooms. Vivian is scared, as she could get suspended if she’s caught, but it’s kind of empowering at the same time. Who knows what the reaction will be from the girls at her school. Maybe, despite the fact that a group of sexist football players rule her school, Vivian can turn Moxie into something great.

“It’s like I’m living in a feminist fantasy…But it can’t be a complete fantasy because Roxane Gay isn’t here.”

I loved Moxie, especially how all of the examples of sexist behavior in Vivian’s school are very real and happen all the time in the US today. I actually had to put the book down a few times because it got too real for me. I could completely put myself in Vivian’s shoes and feel how frustrated and small she felt because of the actions of her principal and his football star son. It’s a horrible feeling to not have your ideas, your opinions, your gender heard or appreciated and be unable to do anything about it. I commend all the girls at Vivian’s school for staying determined in an environment that doesn’t appreciate them.

I also want to highlight a subject that I believe is so important for books about feminism to include. As many girls know, it’s common for ‘good’ guys to say, “not all men do…” and “not all men are like …” and it feels almost dismissive. Jennifer Mathieu really hit the nail on the head the way she explained the problems with statements like these.

“I know all guys aren’t dicks…I get it. But the thing is, when there are so many dickish dudes around you, it gets hard to remember that, you know?”…”And you telling me not all guys are like that doesn’t really help me feel better. Because some guys are like that. A lot of them, actually.”

It was awesome to read about a girl telling a guy, whom she likes a lot, why it’s wrong to use “not all men” statements. At first, I wasn’t sure if Vivian was going to address them when her love interest said these things, but I was pleasantly surprised when she spoke up.

I enjoyed Moxie very much. I think it’s an excellent book to keep in a library accessible to young adults. This title is empowering and educational for females, especially. I’m excited to share Moxie with all the young adults I know who are looking for a great book on feminism and fighting misogyny in general. Thanks for writing such a great read, Jennifer Mathieu!