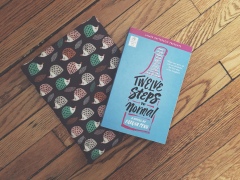 Kira just wants her old life back—before she was forced to move away for a year, before her grandma died, and before her father started drinking too much and was sent to Sober Living. Unfortunately, as soon as she steps back into her childhood home, nothing is the same. First, there are 3 other alcoholics, who her dad met in treatment, living in her house. Second, her best friend is dating her ex-boyfriend, who she still has feelings for. Third, all her friends seem to be mad at her for ignoring their text messages, which she only did because she couldn’t stand hearing about all the events she missed out on. Kira makes a list of 12 steps, just like her father’s 12 step program, that will help revert her life back to the way it was before. Unfortunately, writing a list is easier than actually doing the work, and going back in time just isn’t possible. Maybe Kira will find a way to make a few compromises and accept her father’s illness at the same time.

First, I want to thank Little, Brown and Company for sending me a copy of this title. I was so excited when I saw Twelve Steps to Normal mentioned in PW and I just had to get my hands on it as soon as possible! I’m excited to share this review because addiction and recovery programs hit very close to home for me and providing education about this disease through literature is crucial.

I really enjoyed how Farrah Penn portrayed Alcoholics Anonymous in Twelve Steps to Normal. Kira has been down this road before with her father and he’s always relapsed despite trying the 12 steps in the past. Her dad’s sponsor has faith that AA will work for him this time and he will be able to properly care for Kira again. One of Kira’s steps is to forgive her father, which proves hard, but not impossible. It was refreshing to see a young adult who loves and cares about her dad enough to try and understand his illness. Many addicts never regain the trust of their family after spending years in active addiction, so it made me feel happy as I started to see Kira make an effort to grasp alcoholism.

Kira struggles with self-blame throughout the entire novel, which is something many teens (that I know) deal with. Kira knows the reason she ignored her friends text messages was because she hated the feeling of missing out on fun times. Unfortunately, they can’t understand this and make Kira feel like it was her fault they drifted apart. I feel terrible for her, as it’s completely understandable that moving away from your closest friends would cause jealousy and hurt feelings. I’m glad Farrah Penn wrote a young adult character that is relatable for teens with anxiety. I wish I could somehow jump into the book and tell Kira it wasn’t her fault for taking a step back from friendships to take care of herself.

I loved reading Twelve Steps to Normal and getting to know Kira. It was also great seeing her father progress in his recovery. Farrah Penn represented the recovery process and community well and Kira’s path to understanding her dad’s illness was perfectly crafted. If you’re interested in reading about the realities of having a loved one who struggles with alcoholism, please put Twelve Steps to Normal on your reading list. It comes out in March of 2018. I can’t wait for everyone to get a chance to read this amazing novel. Thank you, again, to Little, Brown and Company for sending me this title in advance!

Understanding the Alacran by Jonathan LaPoma

“I think that, maybe, you get too close to things that are ugly because you want to make them beautiful. I see that you are suffering. But you have a gift. I don’t think you realize how special you are.”

After seeing the darker side of teaching in the US, Will moves to Mexico to escape what could turn into a drug problem. Though he has a limited amount of savings that quickly dwindles, he manages to have some good times there. Most of Will’s days are filled with excessive drinking, partying, flirting with girls, and more drinking. He sees a pattern with the girls he gets involved with—they all leave him after a few days of fun. In a time of darkness, Will meets a woman who changes the way he views himself and the world.

The first thing that I want to mention is that I really, really disliked the main character, Will. This is not completely a bad thing, because it means Jonathan LaPoma wrote him as a very developed and multifaceted character. In the first few chapters, Will is meh, for me. He is just a young man trying to run away from a dark lifestyle that almost consumed him. As the story goes, his true colors of misogyny come out. He continuously treats women badly, hooks up with them, and then thinks horrible things about them once they dump him. He’s in this thought pattern of “woe is me, women are monsters and won’t give me a chance”, even though he has many preconceptions of different women before he meets them. I mean, this guy is super unlikeable. As I said, this means that he was written well and is a dimensional character.

I think the most important part about Understanding the Alacran is that it illustrates the ugliness of alcoholism. Will is obviously an alcoholic. He binge drinks almost every single night. There is a scene when he’s traveling with a woman who really wants him to stop drinking for a little while because they’re riding a bus with strangers. Will basically laughs at her and drinks excessively the whole trip. In addition, he also spends all his traveling money on beer and forces his angry companion to pay for his bus ticket. Blowing all of one’s money on alcohol and not caring how it affects other people is a sign of a drinking problem. There are also multiple times when he tells himself that he will not drink as much on certain nights. Without fail, Will always breaks his promises and gets blackout drunk. Not keeping promises that one sets for oneself is another sign of alcoholism. Describing traits of a drinking problem without trivializing it is important for education. I’m glad Jonathan LaPoma wrote about alcoholism in a responsible way and put this work out there for the public to learn from.

One thing that I didn’t like about Understanding the Alacran was the pace of the story. I remember at page 255, I was still wondering when I would get to the point of the book. Most of the book was just describing a man’s life without a big picture or purpose. The first 53% (I remember checking the percentage on GoodReads) really dragged on and I considered putting the work down completely. I’m really glad I didn’t, but the temptation was there. I wish the book had been 2/3 the length and left out some of the superfluous details of drunk nights and parties.

I have mostly good things to say about Understanding the Alacran, but the slow first half of the book bumped my rating down to a 3/5 stars. This book comes out in August, so be on the lookout for it! I recommend it to people who want to read about the reality of alcoholism. I want to thank Jonathan LaPoma for sending a copy of his work in exchange for an honest review.